Overview Built-in Public governance mechanism where any changes in network (update_proposal) will get approved by 2/3 of register_validator (Master-node holder) by voting_system to incorporate those changes in network.

Product Perspective On-chain governance (by calling proxy contract ?), a formalized way in which a group of people can make changes by voting through the protocol,The purpose behind it is to provide a clear-cut path to consensus.

On-chain governance systems solely work online. Changes to a blockchain are proposed through code updates. Subsequently, nodes can vote to accept or decline the change. all nodes have equal voting power. If the change is accepted by ⅔ validator_node, it is included in the blockchain and baselined. In some instances of on-chain governance implementation, the updated code may be rolled back to its version before a baseline, if the proposed change is unsuccessful.

Contract State Transfer: Contract state would need to be transferred to the new version of the contract, either through a migration process or a persistent storage pattern.

Right now, Full node have to upload Valid Self-KYC document (using IPFS) to be a Validator_Node and stake 10Million XDC.

2.2.1. Function UploadKYC User can upload its kyc documents and this documents will be processed converted into bytes and will be added in a transaction data and finally to a block

2.2.2. Function VoteInvalidKYC This function will be used by the Masternode Candidate who can view the submitted kyc and vote against it

2.2.3. Function getLatestKYC This function will be used to retrieve the latest uploaded kyc of the mentioned user

2.2.4. Function getHashcount This will return the number of count of uploaded kyc.

2.2.5. Function GetAllKYC It will return an array of kyc data submitted by the mentioned user 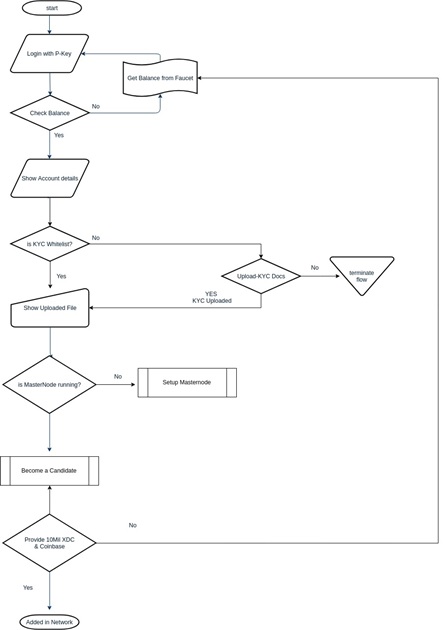